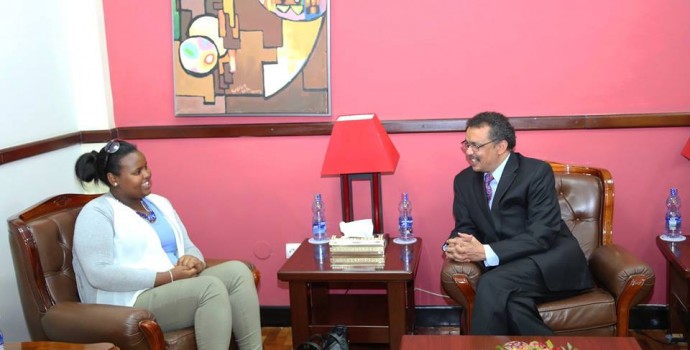 Julie Mason, the principal of the Melbourne-based Baden Powell College, denied any involvement in the bizarre affair. It also emerged that the teenager, Beritu Jaleta Ahmed, was actually coached to lie on camera by the Minister, his PR team and advisers hours before her televised joint press conference with him, reliable ministry insiders told Addis Voice.

The scandal-hit minister had declared on Facebook, radio and TV that Beritu won an “international prize” worth 20 million Australian dollars in school competitions for 8th grade students only to return home to partner with the regime to build a school in Gara Muleta, Eastern Ethiopia, a region well-known for its resistance against the oppressive rule of the TPLF. After the story was exposed as a blatant lie, the minister posted a Facebook message last Saturday that practically blamed the whole saga on the teenager despite the fact that there is ample evidence to show that she and her father were transported from Australia to Ethiopia at the expense of taxpayers to do the puzzling propaganda. The minister, his PR team led by Tewolde Mulugeta, the Ethiopian embassy in Australia as well as OPDO officials including the vice president of Oromia, Abdulaziz Mohammed, were involved in the ill-fated scheme, it emerged.

The principal confirmed that there was neither a competition of that nature nor such a prize to anyone. “I understand that is what she [the girl] said. But it has nothing to do with the school. They are on private family business. They are on family holiday in my understanding,” the principal said.

Nonetheless, the Government of Australia and the Rotary Foundation have already denied knowing her or giving her any amount of money. Manager of Rotary International in Australia, Bruce Allen, pointed out that 1300 Rotary Clubs raised only $A 5.6 million dollars for the Rotary Foundation and its humanitarian projects last year let alone giving “an outrageous amount of money” to a 14-year old school girl. “It is totally out of question. There was no application or grant to this person,” he said.There is no way any Rotary Club in Australia could afford to pay that amount of money, according to the manager.

Bruce Allen, Manager of Rotary International in AustraliaThe Government of Australia dismissed the claims on its part saying it does not even directly give funding for education to the Ethiopian government. “The Department of Foreign Affairs and Trade has not given 10 million Australian dollars to fund a school in Gara Muleta, Ethiopia. The Department of Foreign Affairs and Trade supports education in Ethiopia by providing core funding to the Global Partnership for Education. Ethiopia is a recipient of Global Partnership for Education funding,” said Jenna Hand, a media liaison officer at the department in a written statement sent to Addis Voice. The Embassy of Australia in Ethiopia also reiterated the same position and distanced Australia from the school project in Gara Muleta.

Meanwhile, the Foreign Minister is taking hits on social media after he unabashedly blamed the teenager for the scandal and failed to take full responsibility for his questionable, wreckless and irresponsible behavior. “As you know, Beritu is a 14-year old teen. I think you would agree with me that kids have no malice. So I prefer believing what kids tell me. If trusting kids is a mistake, I prefer to err,” he wrote on Facebook and expressed hope that her dreams will come true despite the fact that there was already an agreement between TPLF and OPDO to build a school in the area. Some speculate that Bertu was brought in as a bait to divert the attention of Oromo youths and fleece the Ethiopian Diaspora.

Numerous Facebookers criticized the Foreign Minister for failing to take full responsibility for dragging the teenager into disrepute for the sake of cheap and twisted propaganda. Some have said that his poor judgment, recklessness and lack of regret makes him unfit for his position as a foreign minister.”

“I am 14 years old and I have been awarded $40 million. I want to donate it. I hope you believe me Dr. Can we have a picture with you and post it on FB?” a commenter mocked the minister. Many commenters vented their anger on the foreign minister and the TPLF-led regime, which they accused of being addicted to lies including jailing and torturing innocent citizens on trumped-up charges of terrorism. Many has pointed out that the teenager is a victim of the TPLF-led regime. Corruption the morals of a child is considered a criminal offense in Australia

Baden Powell College, which was said to have organized the A$20 million 8th grade student competition, is a government school with A$ 12 million annual budget. It has around 1800 students, 180 staff and 50 volunteers, it was learned.

WHO is Tedros Adhanom really ? What is his background?