News of India’s defeat of the Delta variant should be common knowledge. It is just about as obvious as the nose on one’s face. It is so clear when one looks at the graphs that no one can deny it.

Yet, for some reason, we are not allowed to talk about it. Thus, for example, Wikipedia cannot mention the peer-reviewed meta-analyses by Dr. Tess Lawrie or Dr. Pierre Kory published in the American Journal of Therapeutics. See this.

Wikipedia is not allowed to publish the recent meta-analysis on Ivermectin authored by Dr. Andrew Hill. Furthermore, it is not allowed to say anything concerning www.ivmmeta.com showing the 61 studies comprising 23,000 patients which reveal up to a 96% reduction in death [prophylaxis] with Ivermectin. See this.

One can see the bias in Wikipedia by going on the “talk” pages for each subject and reading about the fierce attempts of editors to add these facts and the stone wall refusals by the “senior” editors who have an agenda. And that agenda is not loyalty to your health.

The easy way to read the “talk” page on any Wikipedia subject is to click the top left “talk” button. Anyone can then review the editors’ discussions.

There is a blackout on any conversation about how Ivermectin beat COVID-19 in India. When I discussed the dire straits that India found itself in early this year with 414,000 cases per day, and over 4,000 deaths per day, and how that evaporated within five weeks of the addition of Ivermectin, I am often asked, “But why is there no mention of that in the news?”

Yes, exactly. Ask yourself why India’s success against the Delta variant with Ivermectin is such a closely guarded secret by the NIH and CDC. Second, ask yourself why no major media outlets reported this fact, but instead, tried to confuse you with false information by saying the deaths in India are 10 times greater than official reports. See this.

Perhaps NPR is trying so hard because NPR is essentially a government mouthpiece. The US government is “all-in” with vaccines with the enthusiasm of a 17th century Catholic Church “all-in” with a Geocentric Model of the Universe disputing Galileo. Claiming that India’s numbers are inaccurate might distract from the overwhelming success of Ivermectin. 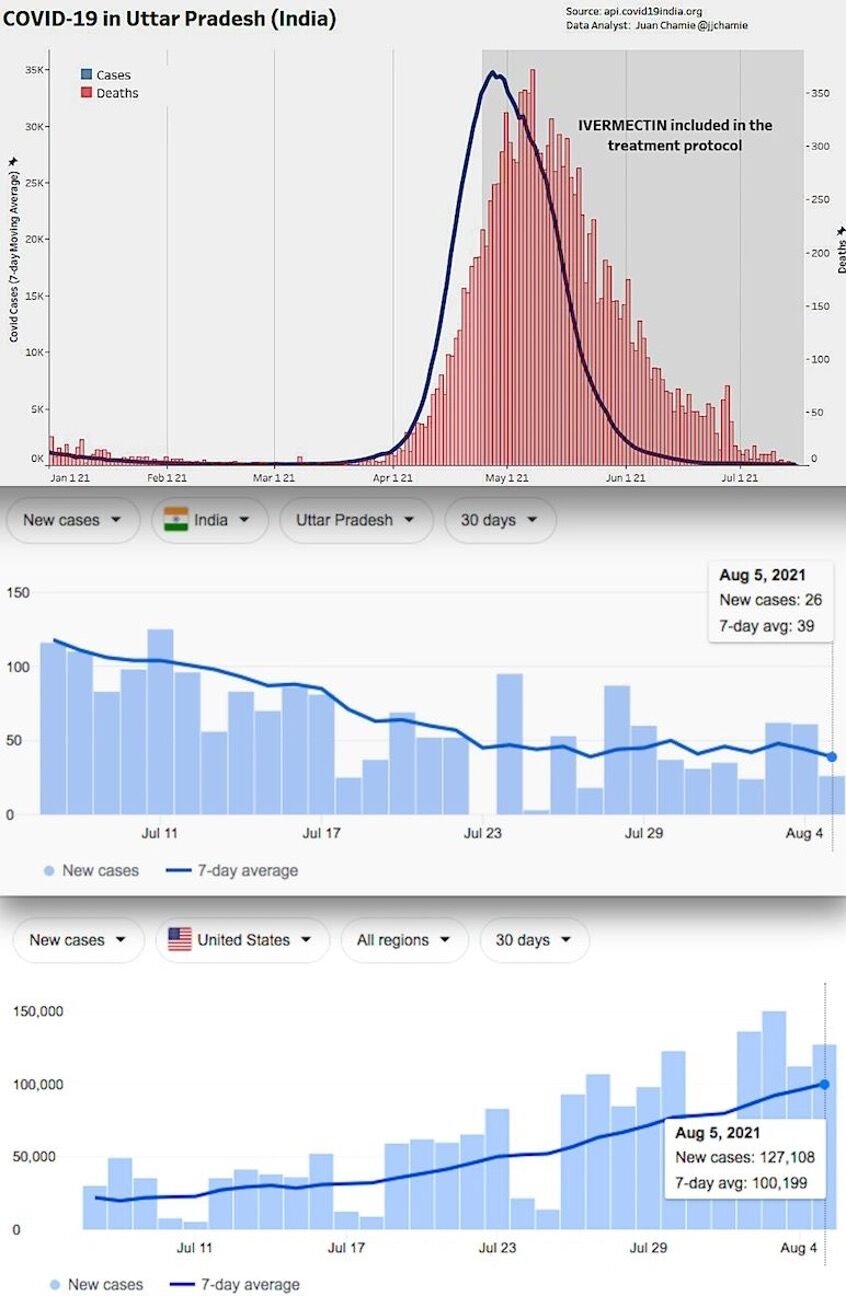 The graphs and data from the Johns Hopkins University CSSE database do not lie. On the contrary, they provide a compelling trail of truth that no one can dispute, not even the NIH, CDC, FDA, and WHO.

Just as Galileo proved with his telescope that the earth was NOT the center of the Universe in 1616; today, the data from India shows that Ivermectin is effective, much more so than the vaccines. It not only prevents death, but it also prevents COVID infections, and it also is effective against the Delta Variant.

In 1616, you could not make up the telescopic images of Jupiter and its orbiting moons, nor could you falsify the crescent-shaped images of Venus and Mercury. These proved that the earth was NOT the center of the Universe – a truth the Catholic Church could not allow.

Likewise, the massive drop in cases and deaths in India to almost nothing after the addition of Ivermectin proved the drug’s effectiveness. This is a truth that the NIH, CDC, and FDA cannot allow because it would endanger the vaccine policy.

Never mind that Ivermectin would save more lives with much less risk, much less cost, and it would end the pandemic quickly.

This data shows how Ivermectin knocked their COVID-19 cases and deaths – which we know were Delta Variant – down to almost zero within weeks. A population comparable to the US went from about 35,000 cases and 350 deaths per day to nearly ZERO within weeks of adding Ivermectin to their protocol.

By comparison, the United States is the lower graph. On August 5, here in the good ol’ USA, blessed with the glorious vaccines, we have 127,108 new cases per day and 574 new deaths.

It is not even close. Countries do orders of magnitude better WITH Ivermectin. It might be comparable to the difference in travel between using an automobile versus a horse and buggy.

Let us look at other Ivermectin using areas of India with numbers from August 5, 2021, compiled by the JHU CSSE:

Now let us look at an area of India that rejected Ivermectin. See this.

Tamil Nadu announced they would reject Ivermectin and instead follow the dubious USA-style guidance of using Remdesivir. Knowing this, you might expect their numbers to be closer to the US, with more cases and more deaths. You would be correct. Tamil Nadu went on to lead India in COVID-19 cases. See this.

Like the JHU CSSE data, Galileo’s telescope did not lie either, and the truth can usually be found in plain sight. Ivermectin works, and it works exceedingly well. Harvard-trained virologist Dr. George Fareed and his associate, Dr. Brian Tyson of California’s Imperial Valley, have saved 99.9% of their patients with a COVID Cocktail that includes Ivermectin. They have released versions of their new book published in the Desert Review that everyone should read. See this.

I could talk about how every one of my patients who used Ivermectin recovered rapidly, about my most recent case who felt 90% better within 48 hours of adding the drug, but I won’t. I could write about how Wikipedia censors more than Pravda, about how you should always read the “talk” section of EVERY Wikipedia article to go behind the scenes and understand what the editors DO NOT want you to read, but I will refrain.

I could write about VAERS and how it is so much easier to navigate by following Open VAERS or how Wikipedia has unfairly portrayed Dr. Peter McCullough, one of the world’s sharpest and most credible doctors. But I will hold back. See this.

I could also discuss our current cancer treatment system’s dangers and how chemotherapy and radiation stimulate cancer stem cells and cancer recurrence. About how this information has been suppressed and how the addition of repurposed drug cocktails can help prevent this, but I digress. See this.

I could recite the history of early outpatient treatment of COVID-19 with repurposed drugs, including Ivermectin, with all the specifics, and EXACTLY WHY this lifesaving information has been censored, but instead, I will leave researching these topics to each of you readers as individuals. See this.

Because you already know what will happen if you simply sit back and swallow what the media are feeding you. You MUST question what the government tells you, and always DO YOUR OWN research.

Following the 1616 Inquisition of Galileo, the Pope banned all books and letters that argued the sun was the center of the Universe instead of the Earth. Similarly, today, the FDA and WHO have banned any use of Ivermectin for COVID outside of a clinical trial.

See this and this.

YouTube and Wikipedia both consider Ivermectin for COVID as heresy.

Wikipedia defines heresy as: “any belief or theory that is strongly at variance with established beliefs or customs, in particular the accepted beliefs of a church or religious organization. The term is usually used in reference to violations of important religious teachings, but is also used of views strongly opposed to any generally accepted ideas. A heretic is a proponent of heresy.”

Heresy is disagreeing with the government, or their health authority, even if they are all wrong and even if their policies harm people. Today we no longer call it heresy; it is labeled as misinformation.

Galileo was found guilty of heresy and sentenced on June 22, 1633, to formal imprisonment, although this was commuted to house arrest, under which he remained for the rest of his life.

On August 7, 2021 Medpage Today published a new quiz, “Can COVID Misinformation Cost You Your Medical License?”