Malaysia – After more than 1.3 million infected cases and over 11,000 deaths, the surging infective and death rates should give pause to think and re-strategise if the sole strategy of vaccination has fallen short.Instead, the call for Ivermectin to complement the vaccine strategy is met with resistance under the shield of corporate-financial interest and bad science. 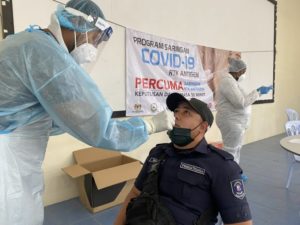 Corporate-financial interest has an indirect role to effect bad science. The US Food and Drug Administration’s (FDA’s) condition for vaccine Emergency Use Authorisation (EUA) is that there must be no “adequate, approved, and available alternative”.

Ivermectin is a viable alternative and therefore a threat to the EUA. Demonisation and chorus in synchroneity to bastardise Ivermectin could be heard, ranging from calls for more comprehensive clinical studies, low-level evidence, to small sample size; and even “pandemic of the unvaccinated”.

Had Ivermectin been found beneficial for a different disease and not for COVID-19, the hoo-ha now would not have happened.

Admitted that many of the Ivermectin studies were not well designed. Randomised controlled trials (RCTs) of Ivermectin were conducted mostly by physicians desperate to seek a COVID-19 cure during the pandemic.

They were neither well-funded nor seasoned researchers unlike the RCTs funded and conducted by the pharmaceutical companies.

Local critics of the Ivermectin usage who themselves have never personally conducted a RCT and have never treated a COVID-19 patient with Ivermectin lack credibility to criticise.

Merely fault-finding the weakness of the Ivermectin RCTs without acknowledging most of the studies only shows their bias and absence of objectivity.

Bad science reigns in the current discourse, or the absence of it, in the mainstream narrative concerning the COVID-19 pandemic. While world renown scientists discuss and caution the danger about mass vaccination programme during the pandemic, antibody dependent enhancement (ADE), immune and vaccine escape, these are taboo subjects to those in authorities and in the establishment.

The case of Israel, hailed as the most vaccinated nation with 58% of its population fully vaccinated, should provide for soul searching.

Israel’s population is 9.3 million and 11,147,426 vaccine doses were administered. Since early July the infection cases have been rising daily.

The first 10 days in August saw an average of 3,395 cases a day. Of this, the highly contagious and most virulent Delta variant accounted for 90% of the new cases. Close to 50% of the new cases had two doses of the vaccine. 90% of all new hospitalisation were vaccinated.

In contrast, the occupied Palestinian territory with 4.7 million population where Israel at first procrastinated to provide the vaccine and later accused of supplying close to expiry ones tells an eye-opening story.

Why is Israel that is highly vaccinated seeing an increasing and much higher rate of infection compared to Palestine?

It has often been said that the benefits of vaccines far outweigh the harm. But his is not to question that vaccines are able to save lives, rather to question the science and highlight the bad science.

Perhaps the most damning of the science is Dr Robert Malone’s recent criticism of the Biden Administration’s vaccination strategy that was reported in the Washington Times on Aug 5. Malone is one of the original inventors of mRNA vaccine.

Malone surmised that from historical observation, viruses evolved in a way to be more infectious in the beginning but became less pathogenic over time, a Darwinian taming process.

However, vaccinating in the middle of a pandemic would cause more harm than good and would prolong the pandemic. Two prominent scientists, Nobel Laurette Luc Montagnier and vaccinologist Geert Vanden Bossche had previously said the same and cautioned about vaccine escape.

The crux of the problem is best summed up in Malone’s own words: “The more people you vaccinate, the greater the number of vaccine-resistant mutations you are likely to get, the less durable the vaccines will become, ever more powerful vaccines will have to be developed, and individuals will be exposed to more and more risk.

“Science tells us here that today’s vaccines, which use novel gene therapy technologies, generate powerful antigens that direct the immune system to attack specific components of the virus. Thus, when the virus infects a person with a ‘leaky’ vaccination, the viral progeny will be selected to escape or resist the effects of the vaccine.

Is the current virulent Delta variant the resultant viral progeny that Montagnier, Bossche and Malone had caution? Or will there appear a much more virulent variant after Delta?

The much uncertainty of the future presents a compelling need for Ivermectin use along with the vaccine strategy. It will limit immune and vaccine escape, slows and blocks virus contagion route. Ivermectin has promise to salvage the bad science in this pandemic. – Aug 15, 2021

PrevPreviousIndia’s Ivermectin Blackout Part I: Censorship of Peer-reviewed Analysis
NextWhy You Can’t Trust What the FDA Says About IvermectinNext